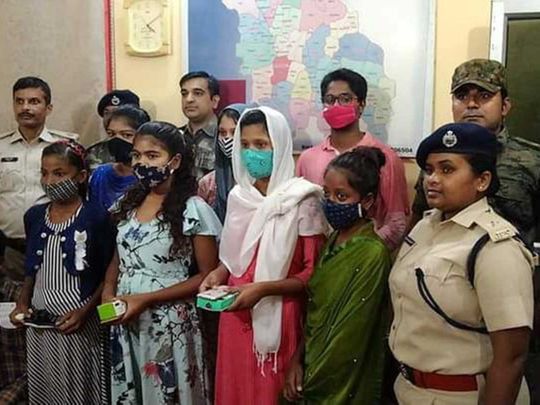 The idea is aimed at bridging the digital divide in society and give opportunities to the have-nots to grow along with those from privileged families.

These smart electronic items are being distributed from the “Gadget Bank” that the Jharkhand police have set up in every police station across the state to collect used electronic gadgets from the people. The people are liberally donating their used smart gadgets following appeals by the police to come forward and part with them to help poor children.

As per the latest official figures, 926 smart phones, 23 personal computers and 13 tablets and laptops have been deposited with the Gadget Bank functioning at 432 police stations across the state. Although citizens have been asked to hand over their gadgets lying unused at home, many people and organisations have donated brand new gadgets.

The gadgets are now being distributed among poor schoolchildren enrolled in government schools on the recommendation of the school principals with the undertaking that they would not be misusing them. In some districts, the police are also giving SIM cards to the children along with the cellphones.

13-year-old Varsha Kumari, a resident of Gumla district, was excited to get the smart phone. “I was unable to attend online classes since my family didn’t have a smartphone. But now I too will be joining the online classes,” said Varsha who studies in Grade eight. Her father is a daily wage earner.

The idea to create gadget banks and distribute electronic items is the brainchild of Jharkhand’s newly-appointed Director General of Police Neeraj Sinha. He was moved by the death of 19-year-old student of Mathematics at Lady Shri Ram College in New Delhi who committed suicide at her Telangana home as she didn’t have a laptop to continue her studies, and the plight of a 11-year-old Jharkhand girl who was found selling mangoes on the streets to buy a mobile phone to attend online classes.

“There is a digital divide in the country and if we don’t bridge this gap, the frustration among those willing to study but facing severe hardships can manifest in various forms,” the DGP told the media, adding the gap between the rich and the poor have the potential to increase crime as well. He added that these gadgets have now become necessary as everything, from classes to exams, have gone online post COVID-19 outbreak and subsequent coronavirus restrictions.

Bound by the responsibility to provide opportunities to the poor and create a “level playing field” in society, he subsequently directed all the district superintendents of police to set up Gadget Banks in their respective areas of jurisdictions and encourage people to part with extra gadgets.

The police are recording the full details of the donors and IMEI numbers of mobile phones and unique ID of the laptops in their official registers before collecting these gadgets. At the same time, these gadgets are being handed over to the students with the undertaking that they won’t use them for anti-social activities and will be held responsible if the IEMI number of smartphones or serial number of laptops is found used in crime.